Excerpts taken from the AKC American Kennel Club website description of the FRENCH BULLDOG.
The French Bulldog resembles a Bulldog in miniature, except for the large, erect “bat ears” that are the breed’s trademark feature. The head is large and square, with heavy wrinkles rolled above the extremely short nose. The body beneath the smooth, brilliant coat is compact and muscular.
The bright, affectionate Frenchie is a charmer. Dogs of few words, Frenchies don’t bark much—but their alertness makes them excellent watchdogs. They happily adapt to life with singles, couples, or families, and do not require a lot of outdoor exercise. They get on well with other animals and enjoy making new friends of the human variety.

THE FRENCH BULLDOG IS NOW IN THE TOP 3 POPULAR DOGS IN THE COUNTRY. ONCE YOU COME INTO CONTACT WITH A FRENCHY, YOU CAN SEE WHY! LOVABLE, ALETT, SWEET, ACTIVE, HARDLY A BARK AT ALL. THEY LOVE ALL THEY COME IN CONTACT WITH. 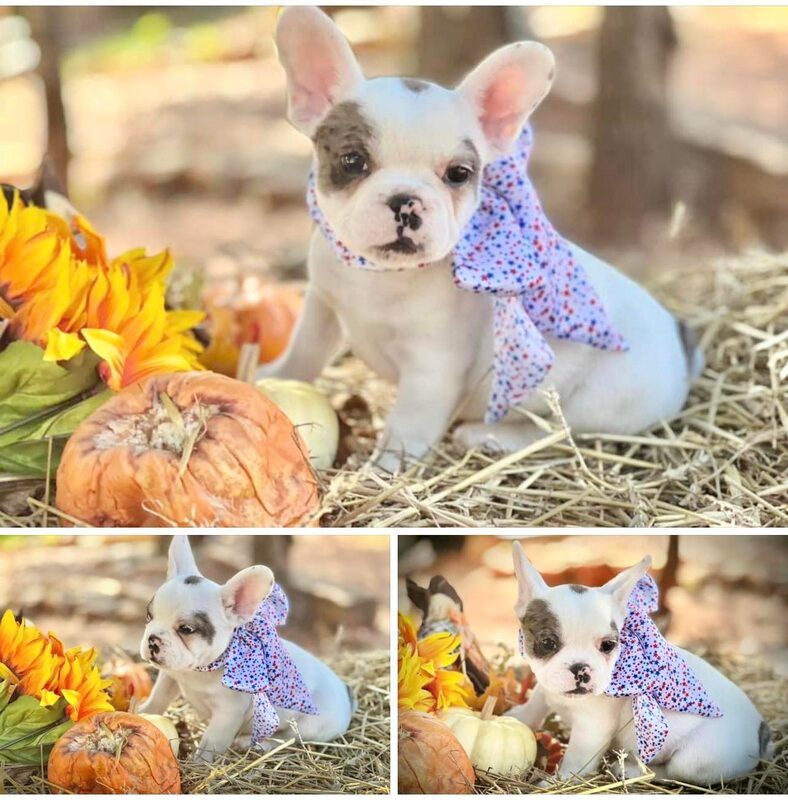 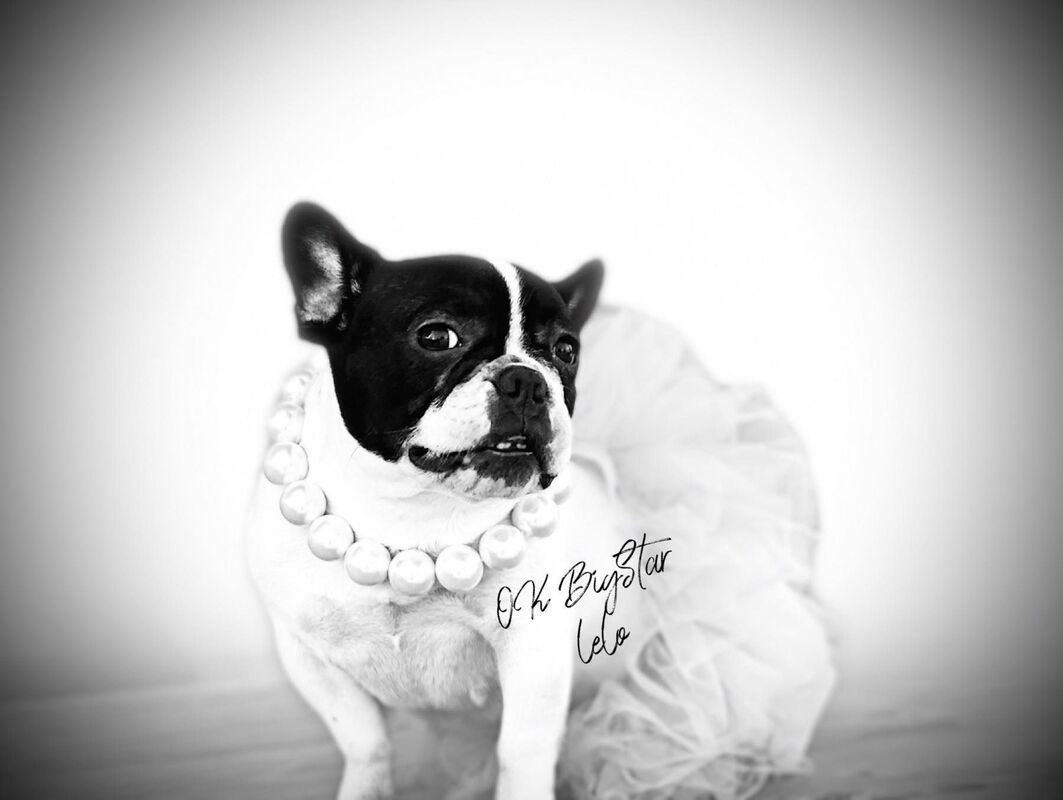 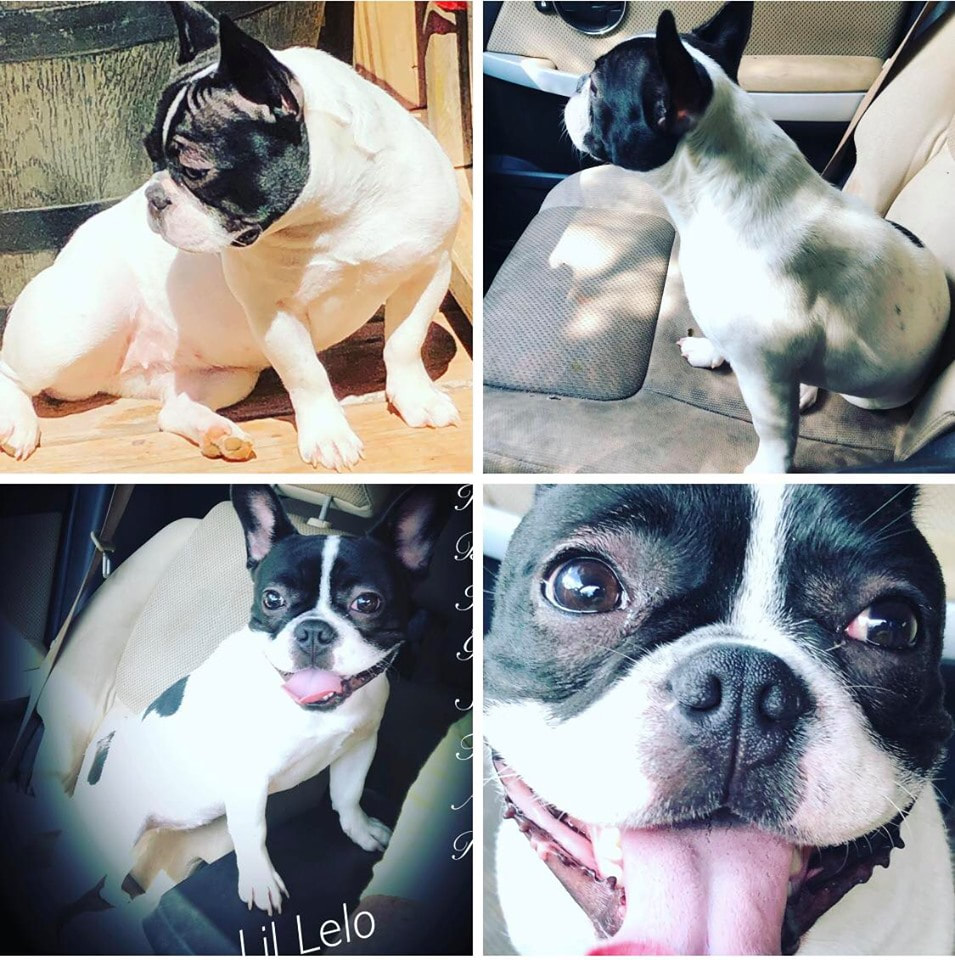 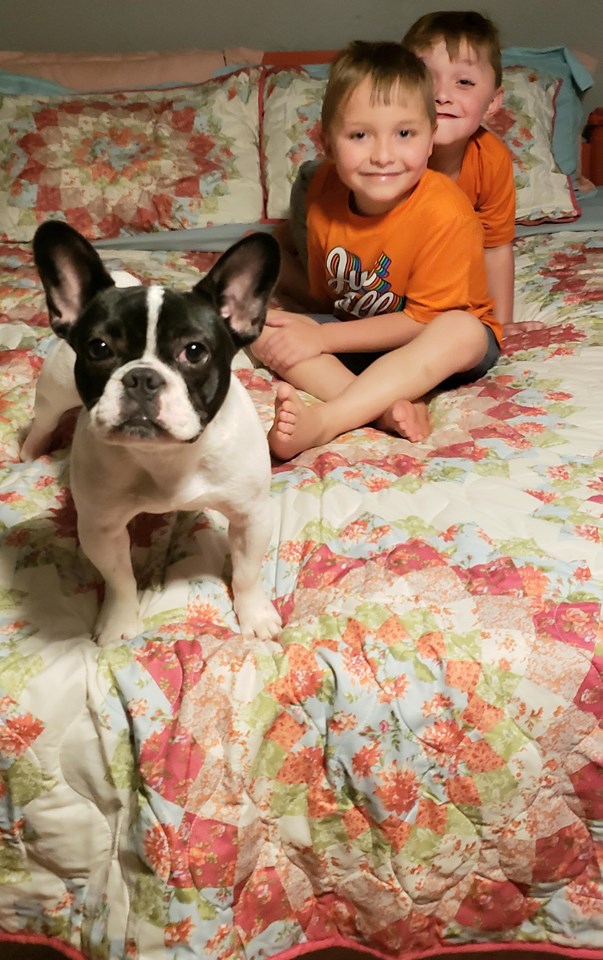 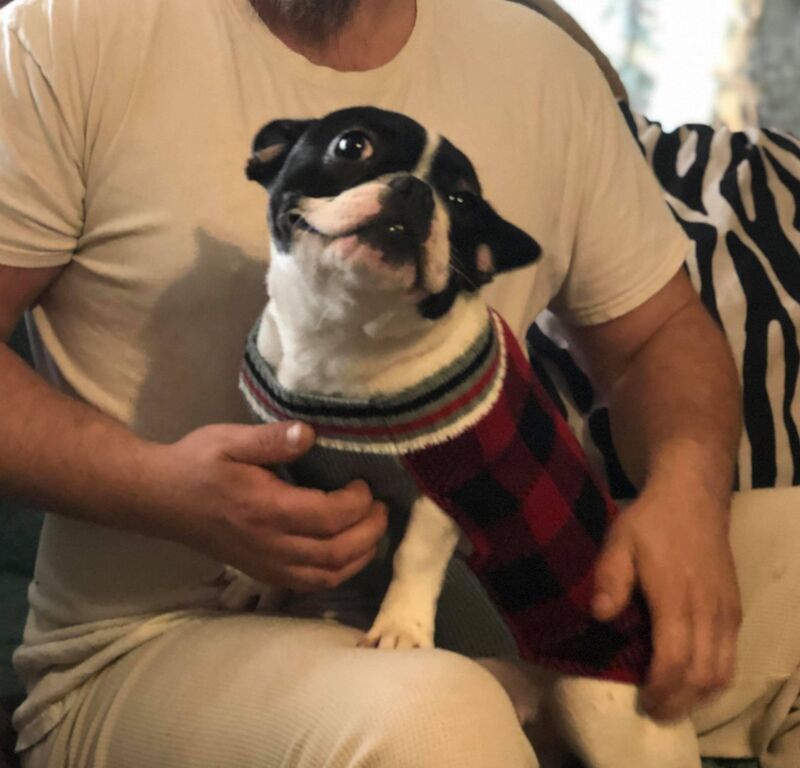 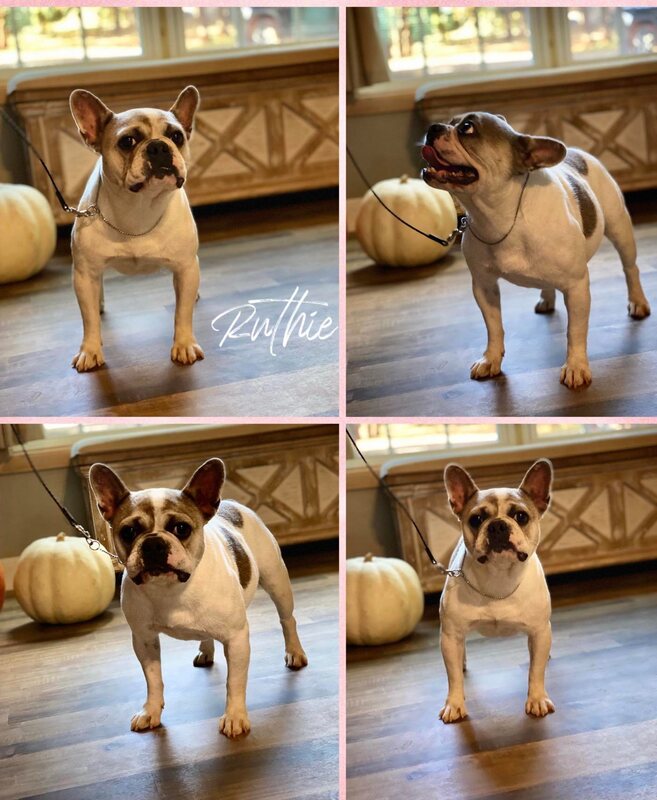 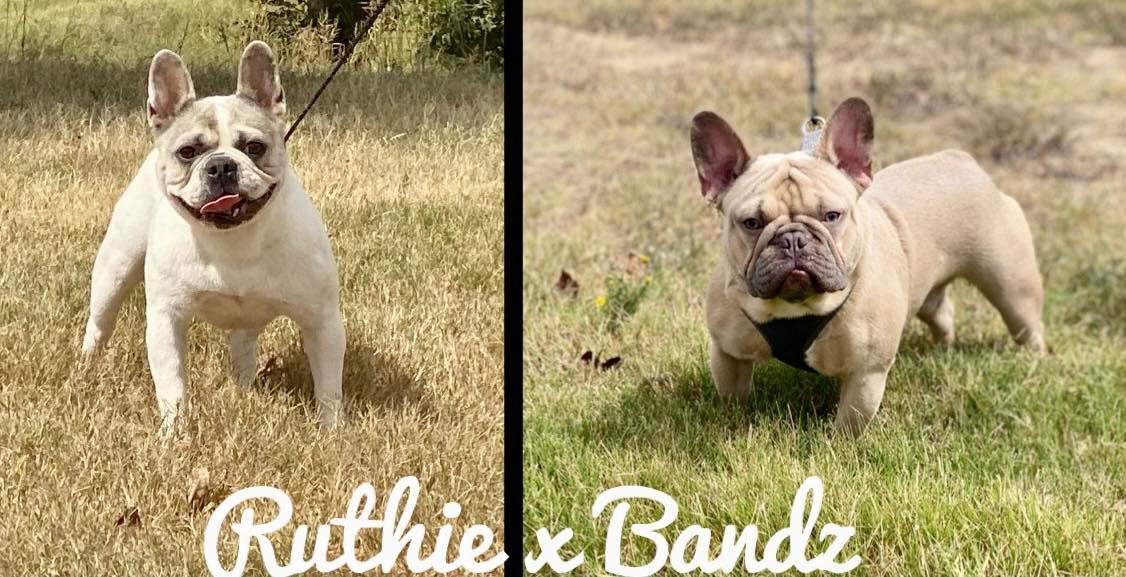 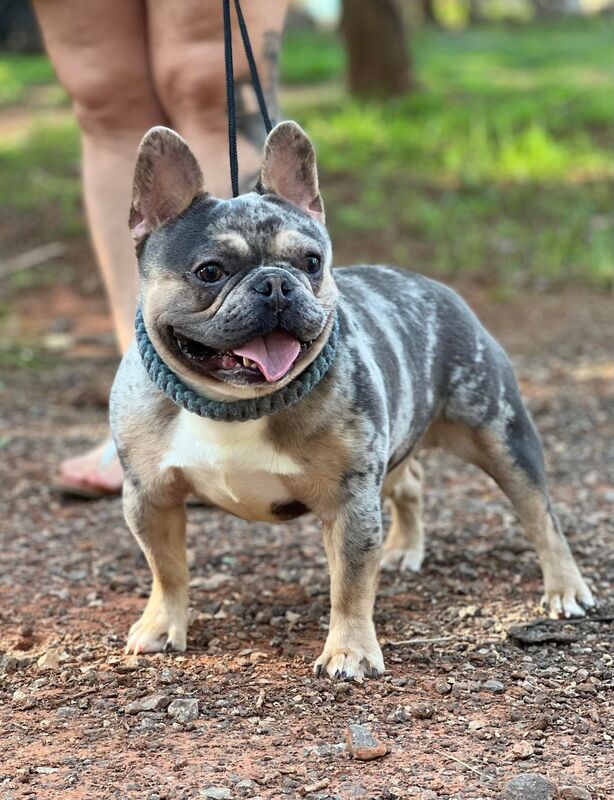 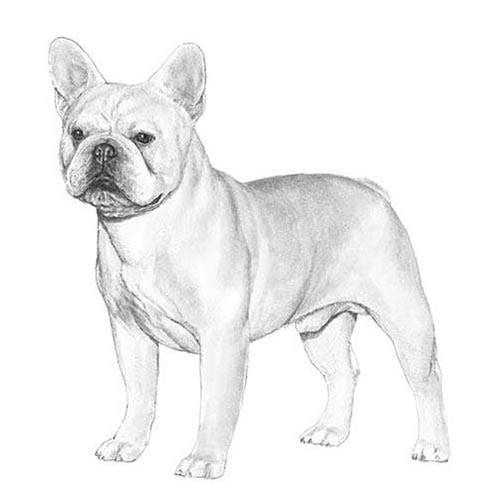 LIFE SPAN 12-15 YEARS WEIGHT 20-30 LBS
French bulldogs are one of the United States’ most popular dog breeds – ranking at number four out of 195. You’ve probably seen these handsome pups are all over Instagram; their compact size makes them great tagalongs on outings and day adventures, and their sweet personalities make them into excellent companions.
These little charmers are small enough that they make fantastic pets for city dwellers, and Frenchies don’t require a lot of outdoor exercise or play space.
French bulldog history is as fascinating as the silly personalities and easygoing temperament of these little dogs, and perhaps most interesting of all is the Frenchie’s rise to fame.
The origin of the breed:French Bulldogs belong to the common group of mastiff-like dogs, and the distinctive innate features of this breed are benevolence and docile nature. The ancestors of the French Bulldog are deservedly considered the English Bulldogs, from which the new breed inherited its very characteristic and original structure.
The most popular and most likely theory for the emergence of the breed was the version of the migration of workers during the industrial revolution. It was then that the Old English Bulldogs were brought to the territory of France, the external characteristics of which acquired some noticeable transformations.
At the turn of the nineteenth and twentieth centuries, the French Bulldog breed became extremely popular among the French aristocracy. In 1870, the first club was created, which brought together a large number of fans of the French Bulldog breed.
Many experts believe that the emergence of a new breed with a massive and medium-sized body was facilitated by the work on crossing the Burgos Bulldogs with specimens of the Toy Bulldog breed imported from England.
History of the French Bulldog in Europe:The French Bulldogs inherited a lot from their ancestors – the Old English Bulldogs, who owe their origin to the Molossian Dogs. These fighting dogs were originally raised by the Greek Molossi family, originally from ancient Athens.
In the process of natural changes, their descendants decreased in size, including toy bulldogs, which for a long time were intended for the entertainment of noble persons and took an active part in the amusement of bull-baiting. Only in 1802 was a special decree issued. British parliamentarians completely banned “bullying” with the use of a bulldog, and after half a century, the sweepstakes with dog fights were also classified as prohibited.
Nevertheless, according to Lady Kathleen, who was one of the founders of the French Bulldog club in England, the dogs of this breed returned to the country with an improved conformation but endowed with very undesirable traits. Such pedigree qualities were represented by erect ears and a frog’s face, a wavy tail, as well as a complete absence of a bulldog character.
History of the French Bulldog in the USA:In the United States, dogs imported from France have aroused great interest among amateur and professional dog breeders. American breeders began serious breeding of the French Bulldog breed in the early eighties of the nineteenth century.
For American breeders who were not constrained by French breed standards, there was simply an endless field of activity, so they managed to get dogs with very high conformation indicators. In addition to the colors that have already become traditional for this breed, American breeders have contributed to the spread of dogs with fawn, red, and even cream-colored coats.
Later, overseas, it was easy enough to create the very first club in the world that specialized in French bulldogs, and already in 1889, the popular New York hotel called Waldorf Astoria opened its doors for the very first mono breed show of French bulldogs. Due to the great resonance of this exhibition, the number of American admirers of this breed has grown very sharply and quickly.


About the BreedThe one-of-a-kind French Bulldog, with his large bat ears and even disposition, is one of the world's most popular small-dog breeds, especially among city dwellers. The Frenchie is playful, alert, adaptable, and completely irresistible.
The French Bulldog resembles a Bulldog in miniature, except for the large, erect 'bat ears' that are the breed's trademark feature. The head is large and square, with heavy wrinkles rolled above the extremely short nose. The body beneath the smooth, brilliant coat is compact and muscular. The bright, affectionate Frenchie is a charmer. Dogs of few words, Frenchies don't bark much but their alertness makes them excellent watchdogs. They happily adapt to life with singles, couples, or families, and do not require a lot of outdoor exercise. They get on well with other animals and enjoy making new friends of the human variety. It is no wonder that city folk from Paris to Peoria swear by this vastly amusing and companionable breed.